Skip to content
+919440369772drdevendrakumarmdhomeo@gmail.com
Consult Now
– Carolyn Hallett, Editor
A strange thing happened as this issue of The American Homeopath was coalescing. I determined the issue would be dedicated to Samuel Hahnemann, with the theme being the subject of ‘provings’, and knew it would be important to interview, among others, Jeremy Sherr because of his enormous contribution to this area of homeopathy. Surprisingly, before we broadcast the focus of the issue, homeopaths from all over began submitting cases cured with remedies that had been proven by the Dynamis School. First a Germanium case, then Androctonus, Plutonium Nitricum, Hydrogen and another Germanium and so on. Initially, none of the homeopaths submitting articles knew about the theme of the issue, nor did they know that Sherr’s work would be featured. 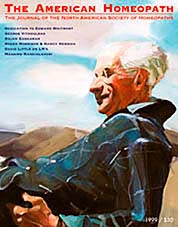 Then, while reviewing the interview with the Rhus Tox Study Group (See page 111) I came across a comment by Jennifer Jacobs about “morphic resonance.” Morphic resonance is the concept hypothesized by Rupert Sheldrake and popularized by Ken Keyes in his book The HundredthMonkey. The core of Sheldrake’s contention is that once a unique thought or event occurs it generates a kind of blueprint which makes a future occurrence of that thought or event more likely. He cites various examples involving near simultaneous scientific discoveries by researchers working independently on different continents. He describes situations in which years of futile attempts by scientists to synthesize a new chemical compound are followed by nearly simultaneous successes by independent laboratories. The conception and articulation of an idea can propel it into the airwaves and allow for automatic transmittal, or so it would seem.
Both Jeremy Sherr and Misha Norland comment in this issue that a proving is similar to a mini-epidemic; that they both involve a kind of energetic “infection” where a strong dynamic force influences a group to the point where individual tendencies and expressions are temporarily overwhelmed by the group experience. These ideas relating to various types of energetic resonance seem to be at the heart of homeopathy yet are difficult to conceptualize and assimilate into an overall comprehension of the mechanism underlying the action of homeopathic medicines. For example, during the course of a proving, certain individuals who are only peripherally involved with the proving, but who do not consume the remedy, often experience symptoms of the remedy. While this phenomenon is consistently reported by master provers, it’s hard for some to believe that it happens or that it is relevant in any way to understanding the remedy being proved. Here in the West, we believe we have a solid grasp of reality. The party line is that if something cannot be explained, it doesn’t exist. Yet as homeopaths, when we witness a patient’s improvement, it is like coming face to face with a miracle, and while I’d like to be able to explain how and why the remedies function, it is not entirely clear.
Some say that a generation of neoclassical homeopaths, who have gone beyond the repertory with a broadened interpretation of the Law of Similars, have created a kind of homeopathy that is an extension of the Doctrine of Signatures. One long-time homeopath said to me recently, “Every time I read a case of a new remedy in a journal it’s like I’m handling a rattlesnake – there’s too much speculation and misinformation.” Some practitioners may feel this way because a group of homeopaths have made a paradigm shift that expands the materia medica and our notions of how to perceive patients by looking beyond straight symptomotology. By working with an expanded palette of well-proven remedies, as well as some evolving notions of how to understand a patient’s “state”, some modern homeopaths are simply adding more tools to the collective homeopathic “tool belt”, while maintaining and building upon the tools that have been available since Hahnemann.
There is clearly more than one way to arrive at a curative prescription and varying approaches needn’t be mutually exclusive. When prominent homeopaths decry the work of their colleagues because of divergent opinions as to which is the “correct” methodology of case analysis and prescribing, it weakens the strength we could have as a profession and causes unnecessary divisiveness at a time when cohesion and cooperation are needed. As one of the Hydrogen provers reported, “There is a very fine line at this time between enlightenment and insanity-a split consciousness.” This comment encapsulates what seems to be happening within the profession. The “enlightened” express their view that others, who practice differently, have unsound practices, but in many instances both are helping the sick to be well. Healing is the fundamental criteria upon which we should judge, while maintaining tolerance for different methodologies within the classical framework as envisioned by Hahnemann and outlined in the Organon.
The concept of dynamisation seems to begin with an intent, and sometimes the more subtle the intention the more potently the dynamic it will unfold. In this issue of The American Homeopath, it would appear that a field of resonance was activated when the decision was made to publish a Provings issue dedicated to Samuel Hahnemann, and including the work of Louis Klein, Jeremy Sherr and many others who have contributed so much to the profession in this regard. I believe that if we each have the intention to establish homeopathy as a more universally accepted healing modality, and if homeopaths could demonstrate a higher degree of tolerance for differing methodologies, then personal criticism would be replaced by a strong unifying dynamic that could take hold and help homeopathy to flourish with even greater success.
Carolyn Hallett, Editor